In this great trick, Criss Angel asks two spectators to put some some of a garbage bin across him, concealing him from sight. Even after he is under the bin, he continues to communicate through a walkie-talkie. After some time under the bin, he asks the spectators to lift the bin up again. However, when they lift it up, Criss is no longer there!

And that is not all. In the very next moment, we see him appear on the top of a building nearby! It appears that he has magically teleported himself from under the bin to the top of the building – a really amazing feat.

Does that mean that human teleportation is really possible? If you are a regular reader here at Magic Secrets Explained, you have probably already started to suspect that there might be something fishy going on here. And you are completely right!

But before we delve into the details, let’s first look at the performance. Pay attention to everything that happens and see if you can spot anything suspicious:

Do you have any ideas about how he did it? If not, don’t worry – that’s why we’re here! As most magic tricks, this trick uses a short moment of misdirection to convince you that something impossible has happened. Where, in this trick, does the moment of misdirection occur? It’s right after the two spectators lift up the bin and start putting in on Criss. Pay close attention: there is a moment when we cannot see Criss at all. He says ‘get a shot of my feet’ and the camera gets pointed down. Then for a moment, all we see in the bin going up, and then we see his feet. But wait a second … did we just get tricked? 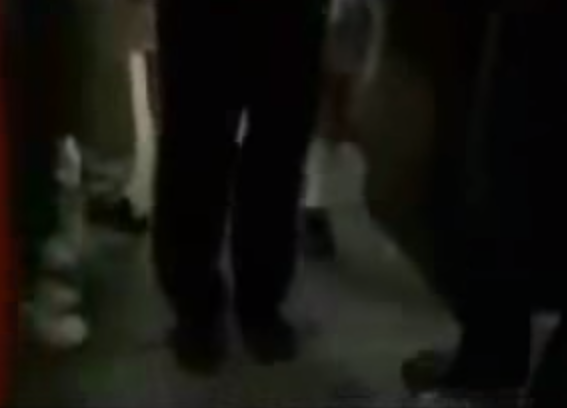 Are we sure those feet belong to Criss?

For quite a lot of time, we can only see the bin and nothing else. Then, when the bin goes up, we see feet, but not Criss’ face. This is where the heart of the illusion happens – those are not his feet! There is just enough time for Criss to step away and someone else to step in his place while we are looking at the bin going up. And since it all happens so fast and Criss is talking all the time, we don’t suspect that this might be another person’s feet. It seems obvious that Criss is still standing there!

In reality, Criss is already away, running as fast as possible to the top of the building on which he will ‘appear’ later. More than half a minute passes from the time the exchange happens to the time when he appears on the roof. It’s a pretty low building so he has just enough time to get there. The voice we hear after the exchange is pre-recorded and isn’t actually coming through his walkie-talkie.

A final remark, just in case it wasn’t obvious. Those people standing around him at the beginning of the trick are not really random spectators. They are stooges and are all helping Criss while pretending to be casual people on the street. That’s why no one says anything when the exchange happens and Criss starts running to the building.

So no, sadly teleportation isn’t possible. As usually, it turns out to be a magic trick. And if some day, Criss Angel really finds a working method for teleportation, I’m sure a Nobel prize will soon be waiting for him.

We have 256 guests and no members online