Now this trick really is something else. In fact, I guess most of the people who have seen it probably think it wasn't a trick at all. As Criss attempts to catch a nail shot from a nail gun, things appear to go terribly wrong – he fails to catch the nail and it goes straight into his hand.

Criss starts screaming like crazy and leaves the site of the shooting, shouting for a medic. His hand is bloody and a nail appears to be stuck through it. It's quite shocking – a brave stunt gone terribly wrong. Or could it be just another trick?

So, was this really what it appeared – a trick gone wrong – or is there something else going on? After all, the main goal of magicians is to fool us. And Criss is a magician. In fact, a pretty good one. So is it possible that the whole thing happened just as Criss planned, and we were fooled again? Of course it is, and this is exactly what happened. Criss Angel is far too experienced to let something like this happen as an accident – he makes damn sure that he will be in no danger at all. However, his job is to make people believe that he is performing incredibly dangerous stuff all the time.

So what did really happen? How did he do it?

First of all, no actual nail was shot. Criss is not crazy and he knows very well that it is impossible to catch a nail with your bare hands. But then what caused the hole in the glass? There are many options. The most likely is that the glass was simply gimmicked. Perhaps it had one spot with a bit of explosive substance which could be triggered from the distance. Or maybe the glass was damaged beforehand on that spot, and all that had to be done was shake the whole glass to make it explode. Or perhaps the assistant actually shot something, only it wasn't a nail but something like a bullet used in paintball (only without the colour!). He didn't actually aim at Criss, and the little bullet was just enough to create a hole into the glass.

But what about all the blood? Well, that one is easy. Look at the video again and observe Criss' hand. Notice that he keeps in an unusual closed position all the time, until the 'nail' hits him. 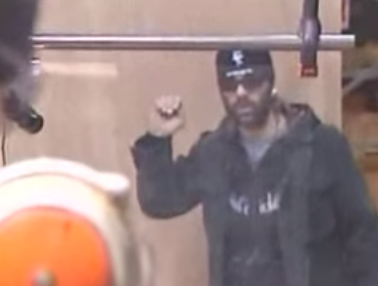 Is that a special, nail-catching hand position? Of course not. He is hiding a packet of red colour there. And when the nail is supposed to hit his hand, he simply releases the colour and pretends it's blood.

The point of this trick was to convince the viewers that he actually tried to catch a nail with his hand. If he just did the trick and pretend to catch a nail like every other magician, it would be far less impressive. But this way, everyone is even more convinced that he is the real thing.

We have 609 guests and no members online