Tony and Jordan performed this amazing magic illusion on their audition for the TV show America's Got Talent. They amazed the audience and the judges with their unique digital magic, which combines magic and technology, producing a unique and entertaining performance.

Tony starts the trick by jumping behind a huge screen that is standing in the middle of the stage. Suddenly, he appears on the screen. He splits himself into two! Then both of them come from behind the screen and we realize we are actually not only looking at Tony, but also his identical twin brother, Jordan.

Tony and Jordan proceed to interact with the screen. They draw a beautiful young lady on the screen, undress her, dress her again, change her weather, protect her from the rain, and all sorts of cool interactive stuff. At the end, they make her exit the screen and appear as a real, 3D person. And as if that wasn't enough, they then 'clone' the girl too!

Watch this amazing illusion, then read the explanation below to find out how it's done.

How did Tony and Jordan do this amazing trick?

A lot of stuff happens in a very short time, so we will try to just reveal the general principles, with special focus given only to a few key details.

Most of this trick should be quite obvious to understand. They have a video playing on the screen and Tony and Jordan don't really interact with the screen or affect what is happening on it. They just practiced a lot and learned exactly when they have to do what to create the illusion they are interacting with the screen.

After the girl appears on the screen, Tony and Jordan shoot red ropes at her. The red ropes fly to the screen and become a red dress on the girl. How is this done?

Well, they don't really 'shoot' the ropes anywhere. The real ropes actually disappear into their sleeves as soon as they let go of them with one hand. The ropes are pulled into the sleeve by some mechanism inside the sleeve. At the exact same moment, two ropes appear on the screen, fly towards the girl and transform into a dress. Basically everything happens on the screen. All Tony and Jordan have to do is release the ropes at the correct moment to create the visual illusion that they are 'shooting' the ropes onto the screen.

How do the girls appear on the stage?

The girls were hiding behind the small cupboard to the right of the screen. Note how Jordan conceals the view with the blanket, enabling the girls to crawl from the cupboard towards the middle of the stage: 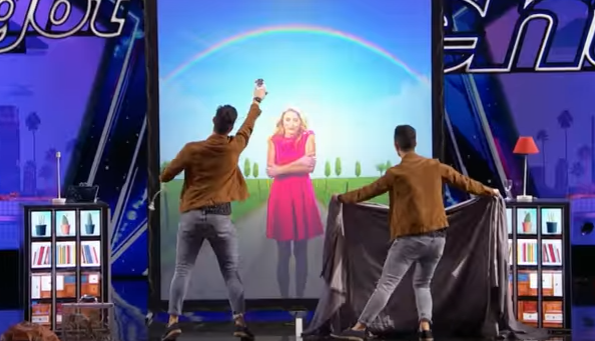 We have 192 guests and no members online